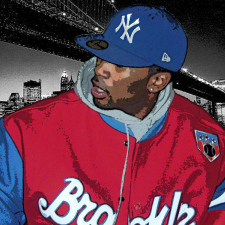 CJ Snipes has not received any gifts yet

Your Location (CLICK the one that is CLOSEST to you)
Location MD, areas I work everywhere

Type of work that you do?(Be Specific So people can find you)
rap

Christopher Jon Snipes, born January 28, 1986, Brentwood, Maryland, USA was raised in Brentwood, MD. Snipes states, hip-hop? It's not dead it's just dormant. Believe it or not Snipes music career started when he got a job at the local IHOP in College Park, MD which was when he decided to the 9 to 5 life was not for him, and his music ability began to grow. Everyone that was staffed at IHOP did music in some form; it was like waiters by day hip-hop heads by night. While customers were waiting on their food, the entire staff that was associated with music would have freestyle battles in the kitchen during the work day. From IHOP Snipes met up with a young engineer that had a studio in his basement where he recorded his first mixtape in 2004, "it's Just Me C-Jeasy." It was love at first track.

After the release of his first mixtape, Snipes hit the streets and the internet hard, selling and giving out his music. Thinking that he couldn't depend on anyone but himself he came across Nisha Management who assisted him in putting out his previous project " I Love CJ Snipes," the mixtape hosted by DJ Casper of the Good Fellaz DJ's. He is currently promoting the release of his 3rd mixtape Progression, and working on his latest project The Flood. He began appearing on other indie artists mixtapes and albums through networking and collaboration projects, and performing state to state, doing online radio interviews and having his music featured on those same stations, to gain further exposure. He has been featured on 244 different independent artist sites, and counting, and is taking the internet airwaves by storm. Although in demand as a guest independent artist for collabs, Snipes found the time to write, and teach himself the art of engineering. He decided to in part-finance his music career by recording other unknown artists.

Currently he has released his Fourth mixtape "The Flood" which will take the streets by storm and is working on his fifth project titled "Contamination," Snipes is looking to take the hip-hop industry by storm and restore it to what brought him to it in the first place, which are artist's like: Eminem, Jay Z, Outkast, Devin The Dude, Pac, Big, and Lupe Fiasco to name a few. Look out for CJ Snipes; he is coming for hip-hop with a vengeance.

Nisha Management is currently putting together the CrossOver Volume II, and we are now accepting submissions for slots, if you are interested submit your tracks to nishamanagement@gmail.com if selected you will be contacted for your slot placement fee of $50.00. There will be 25,000 copies going out in the united states, and 25,000 copies going out to the UK, including labels, radio stations, and A&R Reps. Don't miss out.