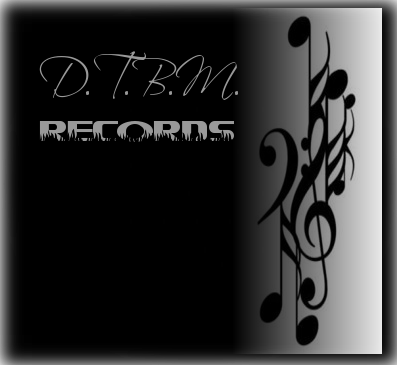 DTBM Records has not received any gifts yet

Your Location (CLICK the one that is CLOSEST to you)
All over the country....

Type of work that you do?(Be Specific So people can find you)
Music

DTBM Records is an independent record label founded by President and CEO, Tony Morgan. Our ultimate goal is to bring a new flavor to the music industry that encompasses a talented group of writers, producers and upcoming artists. We're a company that is musically driven to touch all generations, while dropping a wide range of beats and new vibes that's sure to light up the scene through a genre of music like Neo Soul, Rap, R&B, and even a little POP. Our Artists, N'Qya and G-Wiz are scheduled to release their debut CD by the first quarter of 2009, and UA will also debut their new single, in addition to working on a movie that is scheduled for release sometime next year. DTBM has been fortunate enough to work with great companies like CB Music Group, Galaxy, and Kennysmoove, which are all based out of Atlanta GA. We're looking forward to having a huge success with all the new singles dropping this year, and thrilled about our upcoming projects that's sure to be a guaranteed success.

Deep in the heart of Fort Worth, Texas lies layers and layers of unadulterated talent, creativity and skill. Rising from those layers is Fort Worth’s own music artist N’Qya, a shorter version of her birth name, NaQuiyah (na-kee-yah) LaShawn Hodges. “N’Qya” unveiled her voice at a middle school talent show where her mom and grandmother both were amazed to find out for the first time that they had a singer in their midst. From then on N’Qya went on to gracing stages at singing competitions and band gigs. She later blossomed in a new found talent as a songwriter. This classy, sultry songstress writes and sings of real-life experiences, some of which are personal and close to home and easy to relate to as you rock to each and every piece of ear candy. From catchy beats and lyrics to youthful yet soulful sounds, you’re sure to be cushioned by layers and layers of musical talent. “Bring Back The Noise”, a song you can look forward to being a top-the-charts show-stopper, is an all too familiar plea to bring the love back to a relationship gone sour. “Everything” is a message to a potential lover that the search for love and companionship is officially over. With so many down-to-Earth songs that are described as “Mary J. Blige meets Keshia Cole then mingles with Beyonce’ and Alicia Keys“, N’Qya’s up-and-coming artist status will soon dramatically become platinum artist status. Look forward to music drenched in greatness and sweetness.

UA “Under Age” is from Louisiana and Texas who has performed in front of 15, 000, plus fans in several states. They have open up for well known artist in the rap industry over the last 2 years. Since they have been with our company they have continued there growth and will hit the big circuit some time this year…. They have over 200,000 hits on there myspace page with a growing number of fans through out the country. The group consist of 4 members with unbelievable talent.

Question of the day!!!
Have you ever heard this??
"I Smell That Freak Scent On You
When I Come Around Yo' Way"

TELL UR FRIENDS BOUT ME:

artists if YOU would like to be Featured, Interviewed and Promoted by DRTYBSMNT MULTIMEDIA on the DRTYBSMNT RADIO SHOW and our associated network contact DJ SINCERE at DRTYBSMNT@GMAIL.COM

Jacque Schauls said…
WELCOME!! Thank you for your continued support! When you have all of your info added, please drop me a note so that I can feature your page in support of you.

New R&B Album & Book Available Now FOR IMMEDIATE RELEASE Miami, Florida - July 21, 2020 - After King Cavalli found himself amidst a divorce at 24-years-old, he was upset, confused, and angry. Common emotions tied with the reality of ending one’s marriage. Today, he has channeled those emotions into two creative endeavors. The first being his book, ‘24 & Divorced,’ and the second being the album inspired by said book and events, ‘Wounded.’ His book is available on Amazon, while…See More
6 hours ago
0 Comments 0 Likes

Chicago rapper Z Gang announcing his newest release “Slide wit me” featuring Aj2×. Acting as his first big summer hit of 2020, The tracked has dropped on July 23rd 2020. This will be the artist second single of 2020, following up his track “live” featuring T-Rell which was released this past March. Both tracks are available on all Major Platforms and his video to “slide…See More
9 hours ago
0 Comments 0 Likes

“Lookin cute, straight edges, Yea you know she sittin’ pretty”…. Medusa The Goddess comes in straight off the rip stunting on the competition. Her newest project entitled “Irony” is a seven hit wonder of the World. Dropping her lead off single as the first track with the self title “Irony”, it is a song that you can vibe and dance to. This may just turn into the next…See More
20 hours ago
0 Comments 0 Likes