This is a FAN GROUP for CLASSIC EMPIRE

Leave your FEEDBACK and ACTUALLY chat with the members! 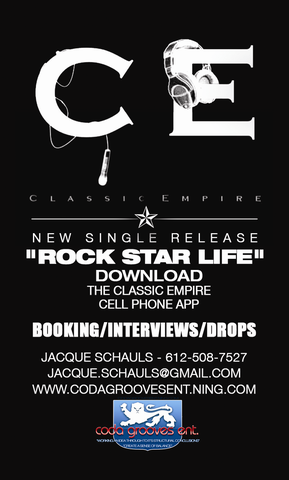 Classic Empire is built on the ways of the true pioneers of Hip Hop. Self proclaimed students of the music industry as a whole Classic Empire and their chosen affiliates and members are and will continue to be trend setters of all facets of music and entertainment. Classic Empire is not just a group, crew, or squad; they are a movement that will and has ambushed the music industry with their catchy hooks and undeniable lyrical prowess. Unbeknownst to many, Classic Empire have been terrorizing mics for over a decade and with age, like a fine wine, their music now, as opposed to their earlier music, most definitely shows their creative and masterful evolution in this ever changing art form.-------Brian Bond, aka “B. Bond,” an Arizona native, has always had a passion for music. During his high school years he began perfecting his craft. B. Bond is a former League Alumni member and is clearly the definition of the industries favorite term “SWAG.” He has performed at countless venues displaying his ability to be a true MC not only in the studio but also when performing with his unparalleled stage presence. With his smooth delivery, masterful lyrical content, and superior punch lines, and word play, not only make him a force to reckon with, but also a target for hate and envy. However, this is no problem for this man, he is solidly built for all that the music and entertainment industry has to offer.---------Malcolm Gulley, aka “J. Blaze,” is a Brooklyn, NY native who migrated to Arizona with his family. After arriving in AZ he teamed up with B.Bond and honed in his MC skills. J. Blaze blesses the west coast with his east coast flow, mentality and style. This young hungry hot artist is extremely talented and is guaranteed to have a major impact on the entertainment industry. J.Blaze’s style is so unique when heard on a record it’s never a question who it is. His diverse ability allows him to deliver from any sound whether it is, down south, east coast or west coast. Hip Hop has changed over the past decade while J. Blaze maintains the ability to hold his own as this industry continues to evolve.

Vashti and I are getting together with the list of radio stations Jacque emailed me, and we'll begin requesting your song.  I would say Good Luck, but you have talent.....I'll see you at the top...I…Continue

You need to be a member of CLASSIC EMPIRE Fan GROUP to add comments!

"Survival of the fittest"
http://www.cdbaby.com/cd/cenku

I support y'all to the fullest.  Super talented!!! And glad to of be a part of the team!! See ya at your show!!

Thank you for you support!!