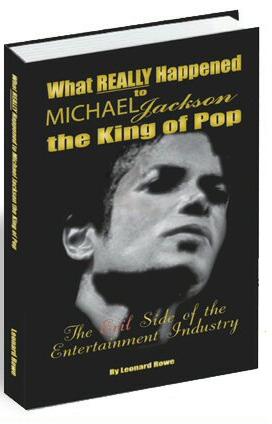 whatreallyhappenedtomj.com has not received any gifts yet

What REALLY Happened to Michael Jackson? FIND out the TRUTH! JUNE 25, 2010
http://www.whatreallyhappenedtomj.com

New Tell All Book, “What Really Happened to Michael Jackson, the King of Pop,”

Atlanta, Georgia (June 3, 2010) – New tell-all book, What Really Happened to Michael Jackson, the King of Pop,
is scheduled
to be released on June 25th, the anniversary of
Michael’s death.  It is now available for pre-order at
www.whatreallyhappenedtomj.com. ;

Written by legendary concert promoter and close friend to Michael Jackson, Leonard Rowe, this controversial book connects greed,
corruption and the underhanded dealings of the entertainment industry to
the events that lead up to Michael’s unfortunate and untimely death.

In the book, Rowe – who was with Michael several days before he passed – writes that he
believes there was a conspiracy behind the murder of Michael Jackson.
Referring to Michael Jackson’s fifty percent ownership of the entire
Sony catalogue, which is now worth billions of dollars.  He says that
Michael told him, “They want my catalogue (music publishing rights)
Rowe, and they will kill me for it.”

“Michael never wanted to sell it (the catalogue); he wanted to keep it for his children,” Rowe writes in the book.  “…Michael Jackson
name and his brand are worth billions and billions of dollars, and he is
worth more to them dead than alive.”

Rowe writes that with Michael Jackson dead the powers that be – and he names names – were able to move in and control the wealth with
the help of a “phony and fradulent” Last Will and Testament.

Rowe further states that they are trying to keep him quiet by slandering his name in an
effort to divert attention from the truth.  But, he is telling it all in
this new book, What Really Happened to Michael Jackson, the King of Pop.

“Michael was a dear friend of mine and it is not right for his life to have been taken the
way it was,” said Rowe.  “Now finally on the anniversary of his death,
the truth about what really happened to Michael Jackson will be told.”

Legendary concert promoter and close friend to Michael Jackson, Leonard Rowe, began
working with Michael and the Jackson Family in 1979-80.  He is the first
and only African American concert promoter to organize and promote an
international concert tour with Michael Jackson and “The Jacksons.  The
tour, “Off the Wall,” was extremely successful and catapulted Michael’s
solo career.  Rowe has continued his relationship with the Jackson
family for the past 30-plus years.

Rowe, who was with Michael a few days before his death, was hired by Michael Jackson to oversee his business and financcial affairs
during the scheduled London concert tour, “This Is It.”

What REALLY Happened to Michael Jackson?

Your Location (CLICK the one that is CLOSEST to you)
What REALLY Happened to Michael Jackson? FIND out the TRUTH! JUNE 25, 2010
http://www.whatreallyhappenedtomj.com

Type of work that you do?(Be Specific So people can find you)
Concert Promoter/Author/Speaker

What REALLY Happened to Michael Jackson? FIND out the TRUTH! JUNE 25, 2010
http://www.whatreallyhappenedtomj.com

Michael Jackson Tribute said…
thanks for the add! MJ FOREVER!!!