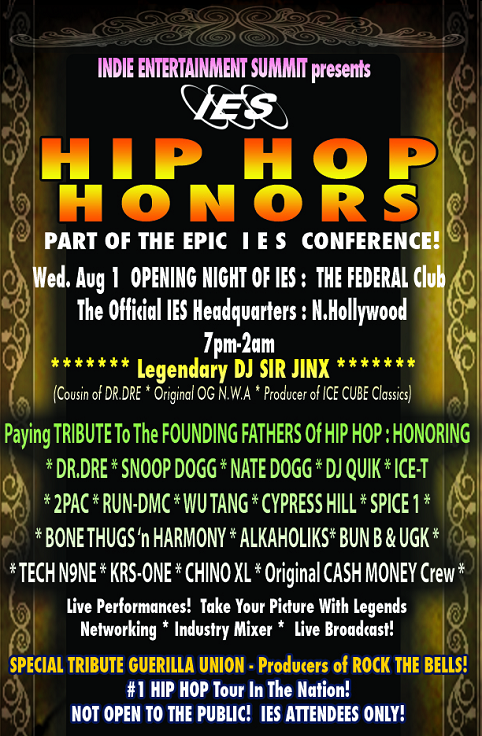 INDIE ENTERTAINMENT SUMMIT :  A MAJOR NEW MUSIC CONFERENCE & FESTIVAL IN CALIFORNIA & THE BEST NEW RAP STAR COMPETITION WITH A $100,000.00 GRAND PRIZE PACKAGE!
LED BY TOP INDUSTRY VETERANS, IES WILL RUN THE FIRST WEEK OF AUGUST EVERY YEAR HEADQUARTERED IN NOHO, HOLLYWOOD & UNIVERSAL CITY AREAS
For Immediate Release                                                        Dateline:  N.Hollywood California
The â€˜I E S  HIP HOP HONORSâ€™ will take place in L.A. August 1, 2012 as part of the IES  Conference & Festival. Paying tributes on an annual basis to artists that have paved the way for future artists and whose music has endured trends and times. The artists being honored at the 2012  I E S HIP HOP AWARDS are DR.DRE, SNOOP DOGG, NATE DOGG, 2PAC, ICE-T, DJ QUIK, WU TANG, CYPRESS HILL, RUN-DMC, BONE THUGS â€˜n HARMONY, KRS-ONE, ALKAHOLIKS, SPICE 1, TECH N9NE, CHINO XL, BUN B & UGK, & the original CASH MONEY crew. Special guests and legendary DJs SIR JINX (DR.DRE, ICE CUBE, KOOL G RAP, TOO SHORT) & JULIO G (CYPRESS HILL, EAZY-E, N.W.A, XZIBIT, WESTSIDE RADIO) will join celebrity hosts at this private event not open to the public. Only attendees of IES are able to attend.
I E S â€“ the INDIE ENTERTAINMENT SUMMIT is launching August 1 2012 as a new annual music and entertainment conference and festival in Southern California. The 5 day event will focus on cutting edge knowledge, networking & performances in the areas of music, Hip Hop dance, & DJs. Featuring over 80 in depth workshops and seminars led by top industry pros designed to help musical artists, rappers, managers, models, DJs, film makers, & independent labels/entertainment companies progress their business and career opportunities in the worldwide entertainment and media industries. Included in the speakers are legendary artists, producers, managers and execs who have worked with the worldâ€™s biggest musical artists. As part of the IES Festival will be the â€˜BEST NEW RAP STARâ€™ competition where IES judges will choose the promising artist to receive a $100,000.00 Grand Prize Package, including a Worldwide Record Deal, marketing & promotion campaign, major music videos, XXL Magazine spread, major press coverage, promo tour & much more! Attendees will include reps from DEF JAM, INTERSCOPE, SHADY, STRANGE MUSIC, NEW NO LIMIT, ACTIVATE, UNIVERSAL, WARNER, DELICIOUS VINYL, SUBURBAN NOIZE & many more!
Each evening will spotlight concerts, performances, film premieres & showcases by attending talent and name performers in a variety of top venues from Hollywood to Universal Studios to the booming NoHo arts district in North Hollywood. The final day Sunday August 5 will be an innovative day at a prestigious location, for an event called DEAL LINK, where attendees will have a chance to introduce themselves & meet one-to one with industry decision makers, including investors, A&R execs, CEOs of entertainment companies that are normally extremely hard for new talent to reach and that can make a difference in oneâ€™s career and opportunities.
IES prides itself in the diversity and strong caliber of the speakers, as well as the high percentage of artists that are able to perform and as the IES tagline proclaims â€œShow The World What You Got!â€. â€œAfter speaking at hundreds of major conferencesâ€, states IES Co-Executive Director Jay Warsinske, â€œ and being involved in over a 300 events over my 39 years in the business (including GRAMMY events, NEW MUSIC SEMINAR, SXSW, IMPACT, BRE, JACK THE RAPPER, URBAN NETWORK, ASCAP EXPO, CMJ & many more), we see what works & what doesnâ€™t & with IES we have assembled â€˜The Best of the Bestâ€™, got rid of a lot that doesnâ€™t work and created the best possible conference & festival in the Entertainment Capital of the World!â€ Warsinske is considered one of the industryâ€™s top entertainment marketing execs and has been a part of launching legends such as N.W.A, Dr. Dre, Ice Cube, Snoop Dogg, Eminem, Wu Tang Clan, Eazy-E, RUN-DMC, Cypress Hill, Fugees, 2Pac, Lil Wayne, Game, Too Short, Chino XL, Nate Dogg, Pitbull, Lil Jon, Psycho Realm, T.I. & many more. â€œThere is no event nothing quite like thisâ€, states Kevin Black, U CAN FLY, ex- President of WARNER Urban, Exec VP INTERSCOPE & DEATHROW (where he broke DR.DRE, 2PAC, SNOOP DOGG, EMINEM, 50 CENT, DOGG POUND & more), â€œpaying tributes to the legends that paved the way for todayâ€™s indie boom & who doesnâ€™t need to learn cutting edge tips from the absolute best pros in every vital area of the business, while getting to perform in front of media & industry in L.A.- the Entertainment Capitol of the World!â€  A Whoâ€™s Who of Top Industry moguls & pros will be speaking & networking at  I E S. Artists have been confirmed from all regions of the U.S. & from over 20 countries around the World that will be performing at IES. 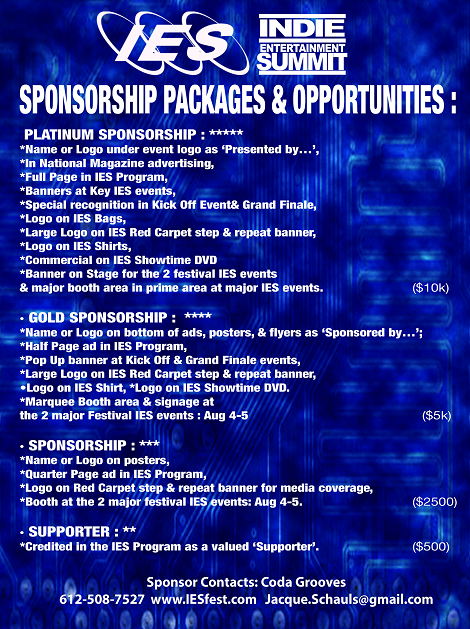 1. Where did this all start? Tell us about your journey in the entertainment business.My journey into the entertainment business begin at 11 months old when I began modeling for Neiman Marcus. I started taking horse riding lessons at the age of two and became an accomplished equestrian rider. I have earned more than 50 ribbons in my career. At the age of six I joined the church choir at…See More
16 hours ago
0 Comments 0 Likes

Support Those That Support You updated their profile
16 hours ago